When we look at the mainstream ethical fashion movement, we see a deep care for the lives of garment workers, and the planet — next to clothing made of animals. Why is that? 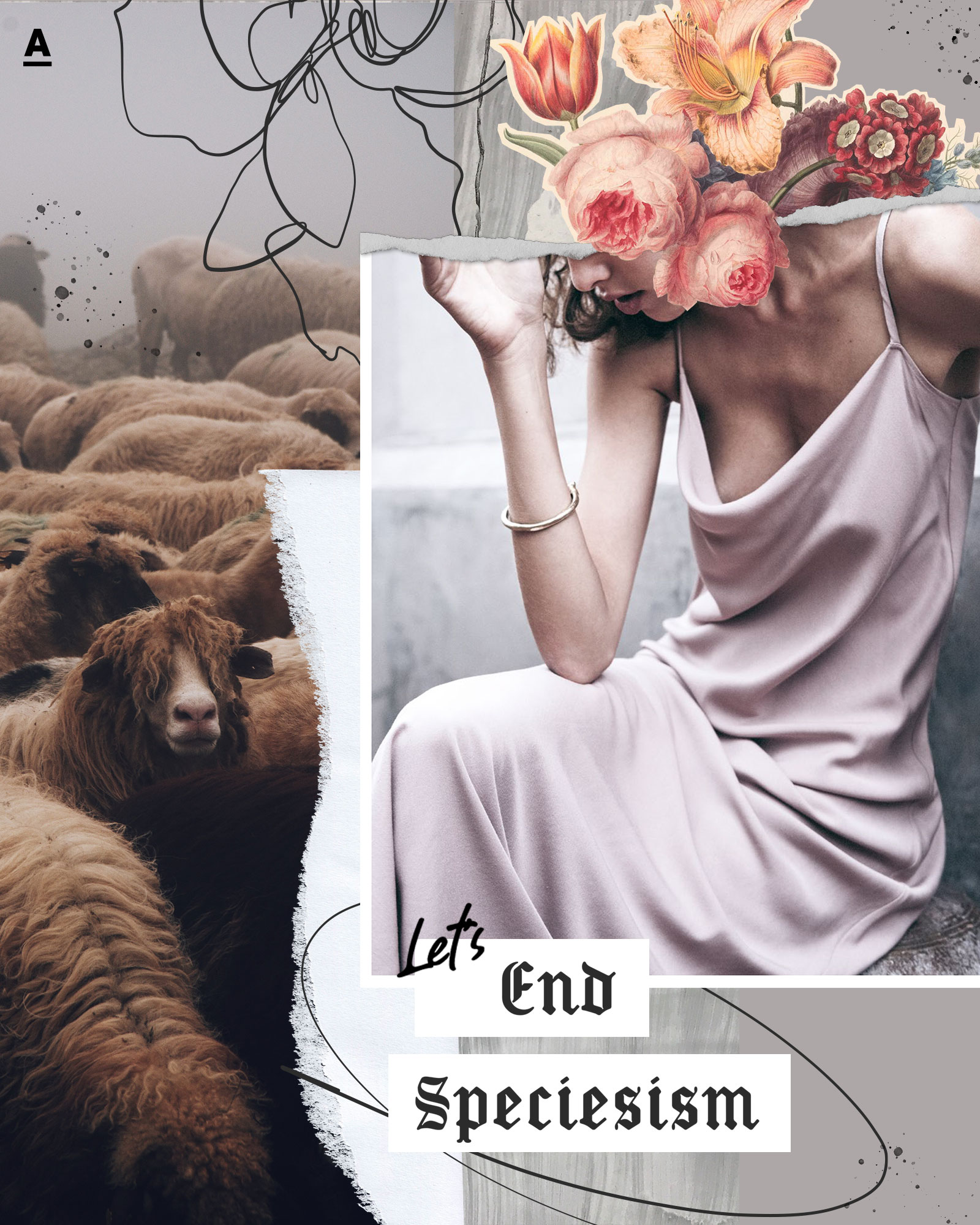 When we look at the mainstream ethical fashion movement, we see a fierce protection of individual rights and safety, a deep care for the lives of garment workers, and of the planet. We see a movement that recognizes that no garment is beautiful if it is made through injustice. And yet, despite it all, we see clothing proudly referred to as ‘fair’ and ‘ethical’, that are made of exploited non-human animals.

Someone sits in a brightly lit factory room, packed alongside others.

The whirring of sewing machines is endless, it’s hot, and everyone hates when the manager comes in. He’s aggressive, he’s sexist, he’s belittling, and he doesn’t care what concerns anyone has for their late and miniscule pay, for their lack of breaks, for the lack of cooling, for that sparking socket by someone’s feet, or for anything else.

“To the brands whose clothes they cut and sew, they’re commodities.”

Everyone here knows that to the brands whose clothes they cut and sew, they’re nothing more than means to an end. Commodified individuals. It doesn’t matter that they aren’t paid a living wage, because to these big brands, their lives are only as important as the profits they make for the CEO and everyone else way up high, somewhere else, somewhere better. It’s dehumanizing.

The mainstream ethical fashion movement recognizes that none of this is acceptable. 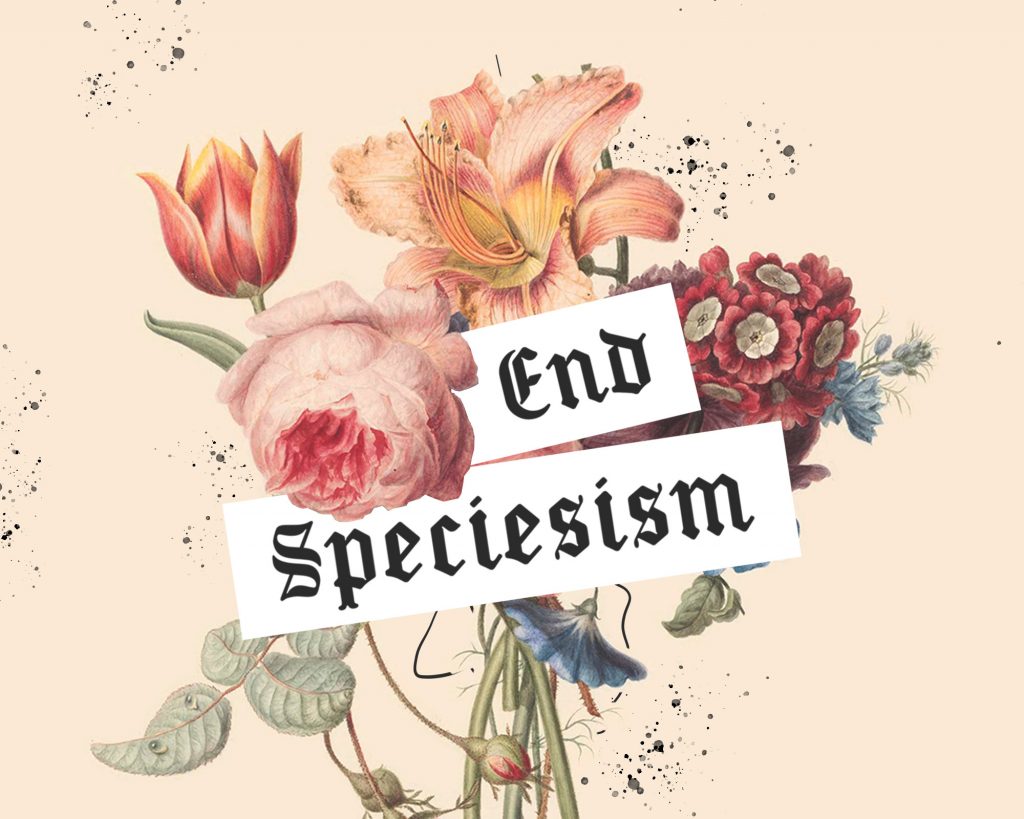 Garment workers are individuals, who exist in their own right, who deserve safety, freedom, a living wage to support not just a life, but a good life.

A life they should get to live free from fear of an untimely end, like that which 1,134 met when the Rana Plaza factory filled with women sewing for fast fashion brands collapsed. Collapsed, after workers had fearfully warned management of the cracking noises they could hear in the walls. After they were told to keep working anyway.

A dress isn’t so beautiful if the woman who made it — likely a woman of color — was exploited in its production.

“We talk about blood diamonds, but there are blood dresses, bags and shoes, too.“

We talk about blood diamonds, but there are blood dresses, blood bags, and blood shoes, too. Not only are the vast majority of garment working women paid poverty wages that can’t cover basic needs like food, shelter, medical care and clean water, they are often sexually harassed, assaulted, degraded on the job.

The mainstream ethical fashion movement stands fiercely against those who say that ‘this is just the way that global production works’, who say that ‘it’s a personal choice to buy lots of cheaply made clothes’, or that ethical fashion advocates should respect the rights of businesses to act however they want under the law. This movement recognizes that laws need to be changed, that garment workers need protection and freedom, and that the system needs to be overhauled.

System Change to Keep the Planet Save

The movement also recognizes that on our ever-warming planet, this system change needs to be about slowing fashion down too, lest landfills full of unworn clothing grow bigger, and more natural resources be drained for cheaply made, lasts-a-second trend tops and little baguette bags.

But there are other individuals behind the fashion industry that the movement forgets.

Someone else also sits in another brightly lit factory room.

They too, are crowded together amongst many others, and they also fear when the person in charge barges through. He is unashamedly cruel, callous, and uncaring about their lives and safeties.

Individuals here are often sick, often in great physical and mental stress, because of the conditions they’re forced into.

But it doesn’t matter to the person in charge. To him, all anyone here is, is money. Means to an end. Commodified individuals. Meat and material.

That second packed factory room, those other commodified individuals described, are ducks. Or they were, until they were sent to a slaughterhouse, their feathers plucked off their hanging bodies to fill jackets and coats.

A movement that recognizes that no garment is beautiful if it is made through injustice, logically, should advocate for the protection of ducks as much as garment workers.

All of these individuals are commodified, exploited, kept in poor, unsafe conditions, treated like they are nothing but what money they can make for the fashion industry.

When we say that humans, including those working in the fashion industry, are ‘treated like animals’, we mean that they are treated badly. With disrespect and maybe even disdain. 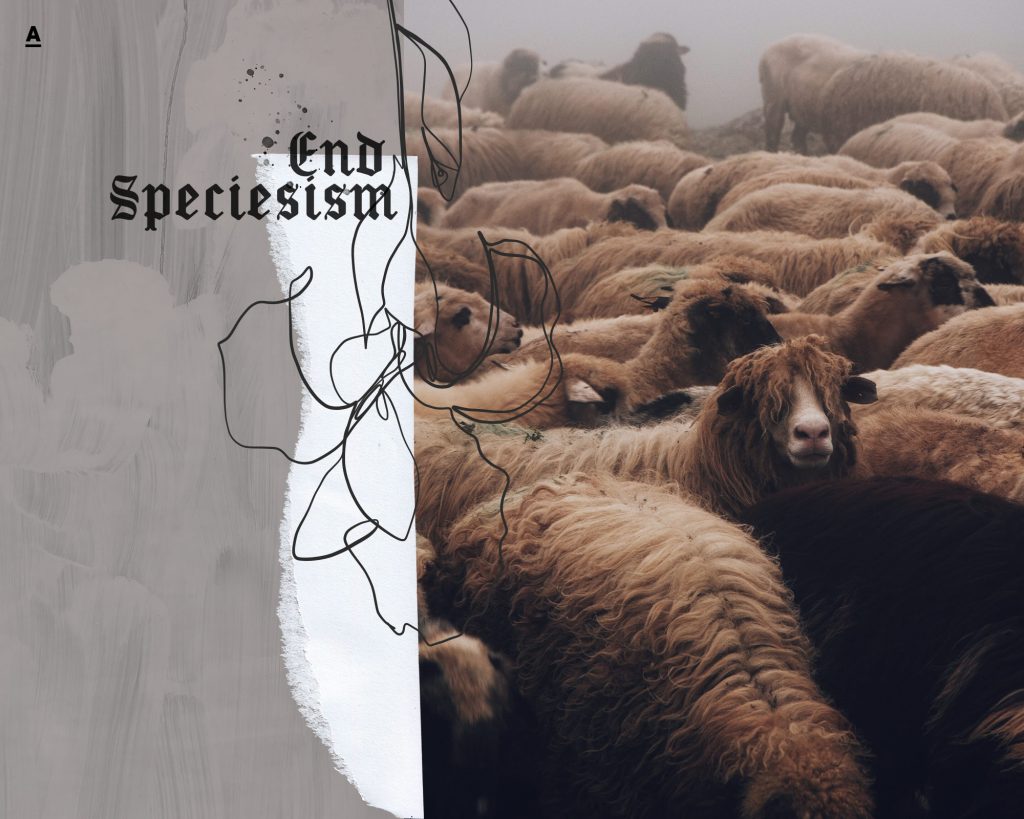 This must mean that we recognize on some level, how poorly other animals are treated in our society. Because you would never want to be treated like an animal. You hope never to be dehumanized.

Who Gets to be Free?

But why is it that we are more concerned by cruelty towards some than others? Why is treating animals with disrespect and disdain different, somehow acceptable? Surely, we are opposed to cruelty, or we aren’t? Surely freedom from cruelty shouldn’t be based on anything as arbitrary as gender, as class, or as species?

Ducks are usually killed at a few weeks old, despite having bodies ready to carry them through flowing streams, muddy marshes and whispering reeds for many years. When we consider this, it’s clear why we don’t want to be dehumanized, it’s because we don’t want to be animalized. Animals are treated as worthless and we don’t think we’re worthless.

“We don’t want to be animalized.“

But what if we recognized that we too are animals — the species homo sapiens? Would that mean accepting our unworthiness, our deservance of cruelty?

What if instead, ‘dehumanizing’ just meant removing the barrier between us and other animals which sees violence upon them justified, and cruelty upon humans who are considered ‘less human’, ‘more animal’ because of racism, classism and sexism, justified too?

What If the Ethical Fashion Movement Stood in Solidarity with All Individuals?

For starters, we’d see an end to bags made from someone’s skin, labelled as ‘fairly made’. There’d be no more jackets filled with feathers from slaughtered and plucked birds touting a ‘responsible’ label.

Our ideas around what ‘ethically made’ means would broaden, become more complex, and become more total.

We’d see an ethical fashion movement that was consistent in its calls for an end to exploitation and commodification of individuals. We’d see a movement that recognizes that just as a garment worker must be paid fairly and be safe in work that she consents to, the individuals who today are made into shoes and sweaters do not consent to any part of this system.

The impact of this would be revolutionary.

Injustices, like liberation, are always intertwined. Just as none are free until all are free, it makes sense that industries built on the exploitation of some, end up exploiting more than a few others. It’s why the leather industry is built on environmental racism, sees forced labor, the destruction of native and sacred land, and the displacement of Indigenous humans and non-humans, for example.

It is far easier to make totally ethical an industry that is not built around slaughter, the raising of individuals just for their killing, in that it is not possible to make the opposite ethical. Hemp production could involve forced and unjust labor, but this will never be systemically integral to the industry. Perpetration induced stress disorder and trauma of slaughterhouse workers in the down and wool industries however, is inextricably tied up in what it is to produce these animal-derived materials. Because we do recognize other animals as our kin, it isn’t our comfortable position to kill.

“Individuals, dead as they walk — numbers instead of names.”

If the mainstream ethical fashion movement recognized speciesism, it would continue to stand fiercely against those who say that ‘this is just the way that global production works’, who say that ‘it’s a personal choice to buy lots of cheaply made clothes’, or that ethical fashion advocates should respect the rights of businesses to act however they want under the law.

This movement would continue to recognize that laws need to be changed, because they would recognize that all individuals need protection and freedom, and that the system needs to be overhauled. There just isn’t any justification for the current system. 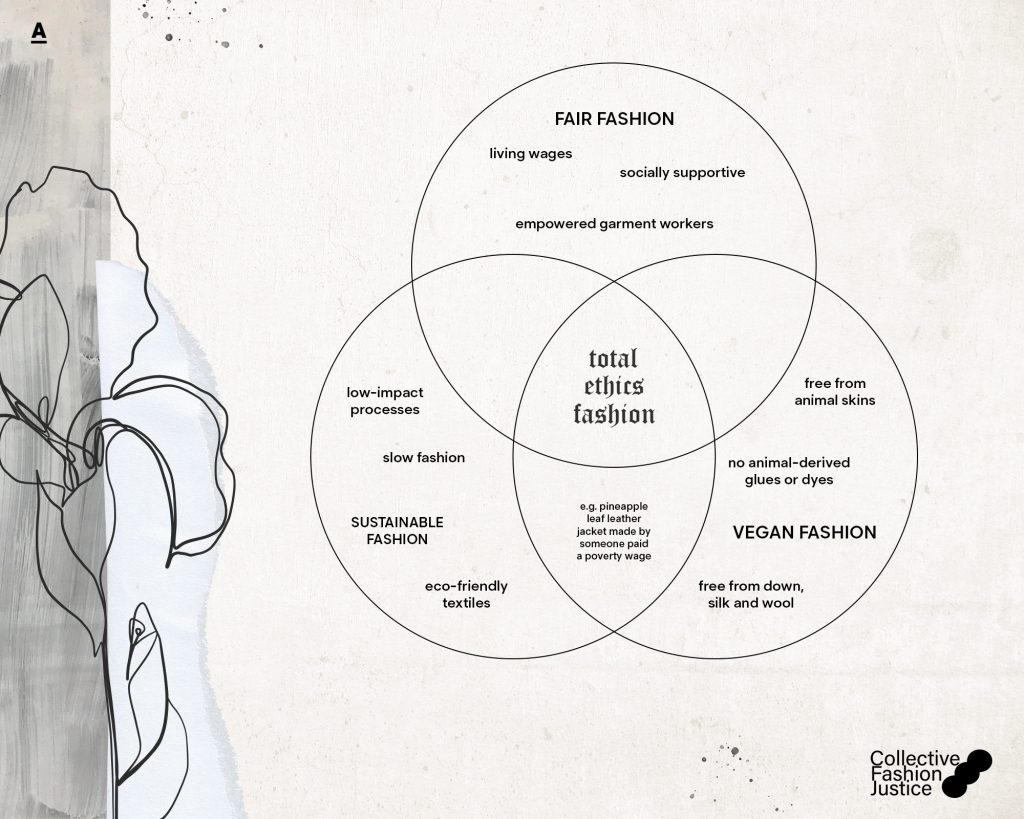 Perhaps it is a coincidence that animal-derived materials are some of the most environmentally harmful to produce, or perhaps it is by design. Perhaps we really were never supposed to fill cleared land and cold factory-farm sheds full of individuals who were dead as they walked, numbers instead of names, carcass and skin values instead of grief upon their ends.

The mainstream ethical fashion movement can only strengthen its message by extending its logic to all individuals, by holding its values consistently.

I yearn for a total ethics fashion system. This system sees garment workers as women of incredible skill, not as commodities. It sees the planet as worth protecting. It sees other animals as individuals rather than objects. It respects everyone’s right to a life, to a good life, and to one that is not ended because the garment is thought to be more important than the individual.

In total ethics fashion, the garment is never more important than the individual. And it doesn’t matter who that individual is. 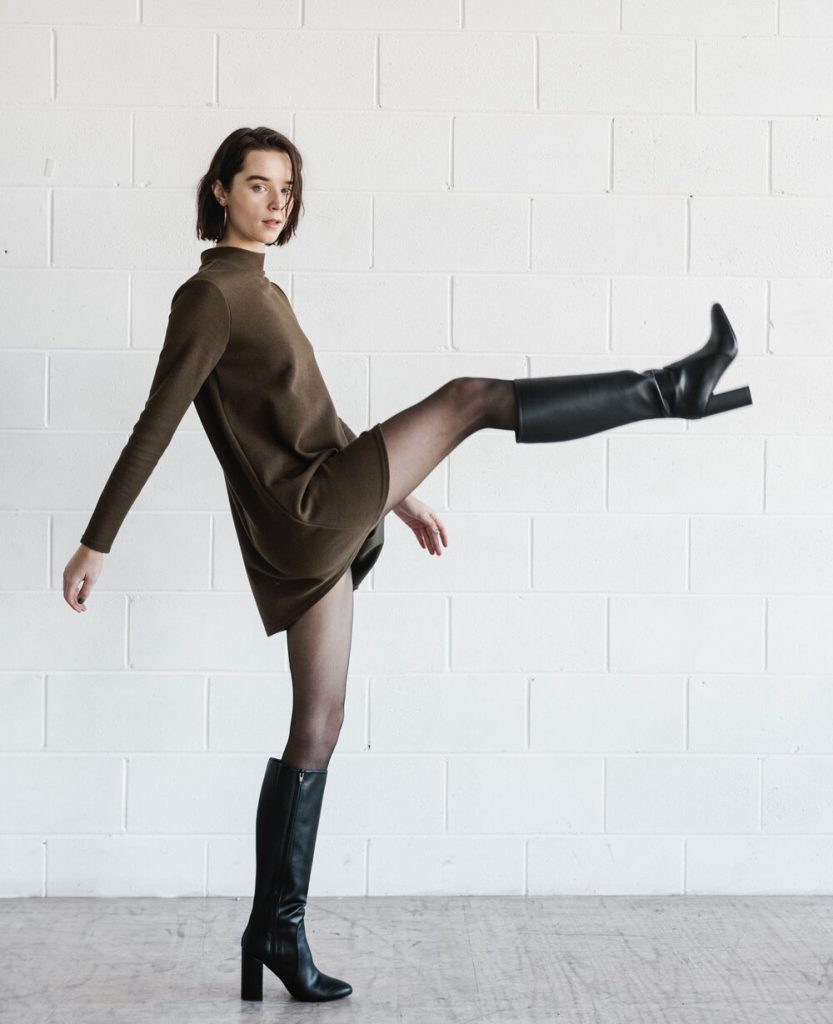 Emma Hakansson is an activist, writer, creative director and ethics consultant based in Melbourne, Australia.

For Antagonist, Emma writes about all things ethical fashion.

Vegan leather, partly because of Fast Fashion Multis using the term to(…)

In a report aptly named “Shear Destruction”, the Center for Biological Diversity(…)

When we look at the mainstream ethical fashion movement, we see a(…)
Login
0 Comments
Inline Feedbacks
View all comments 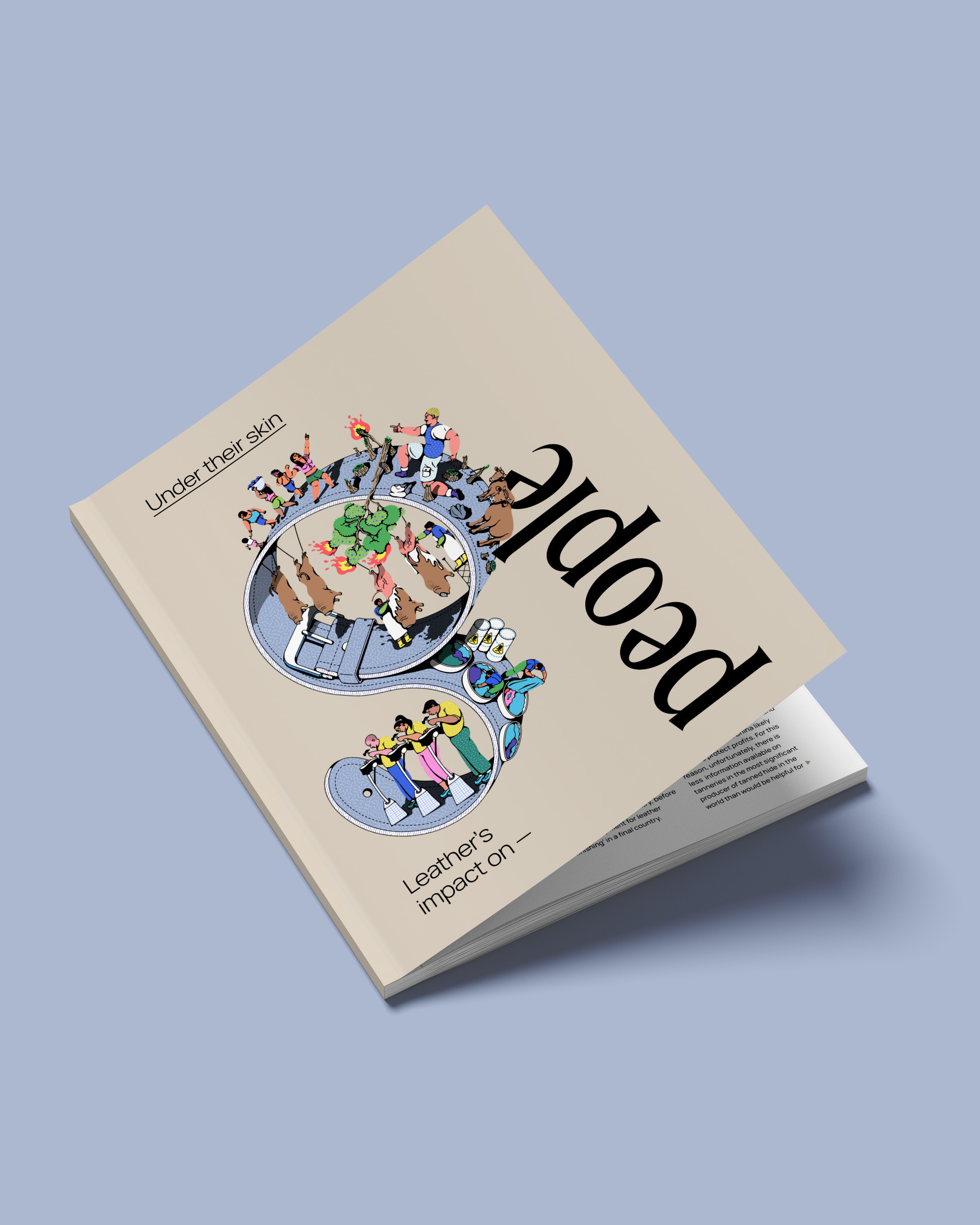 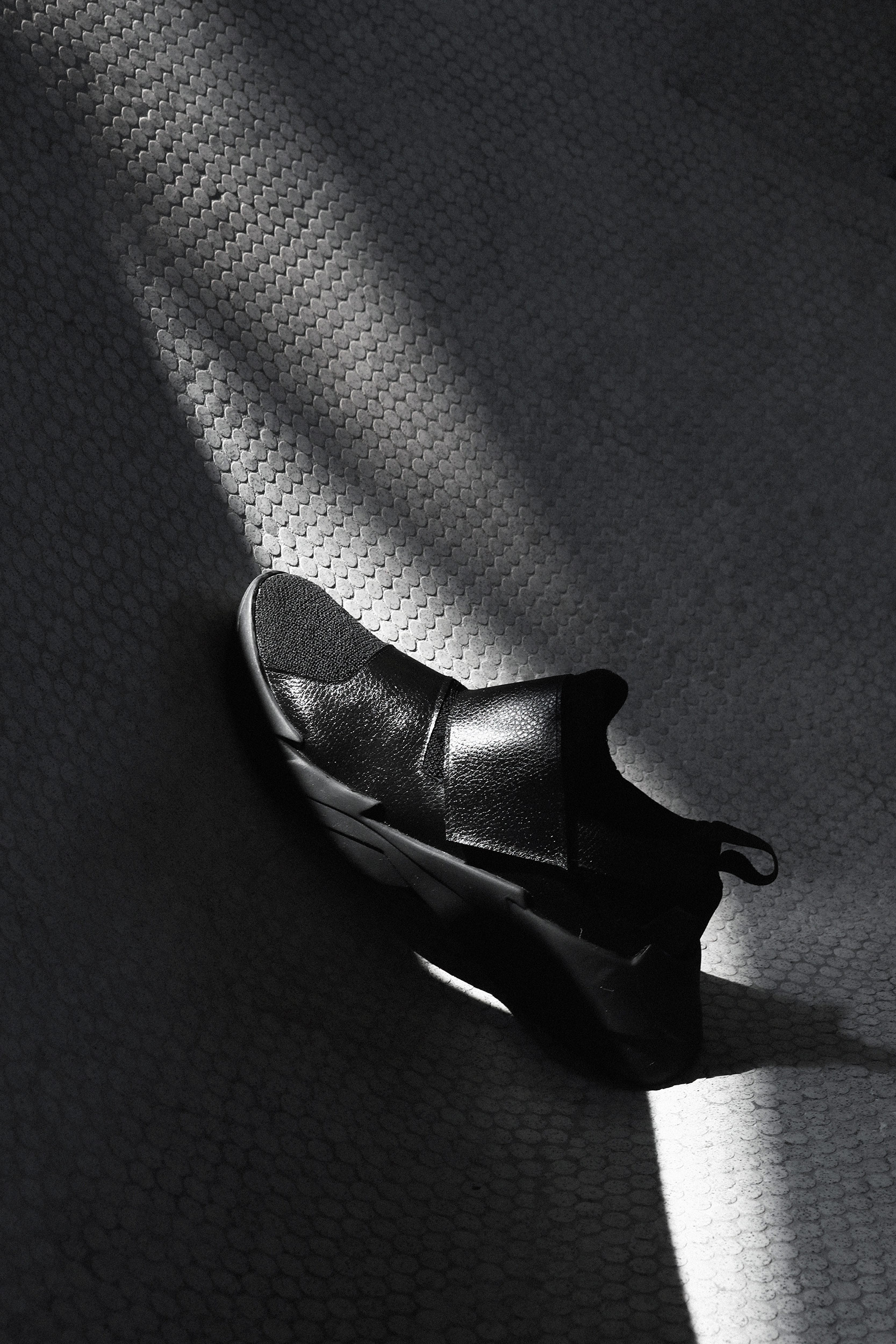 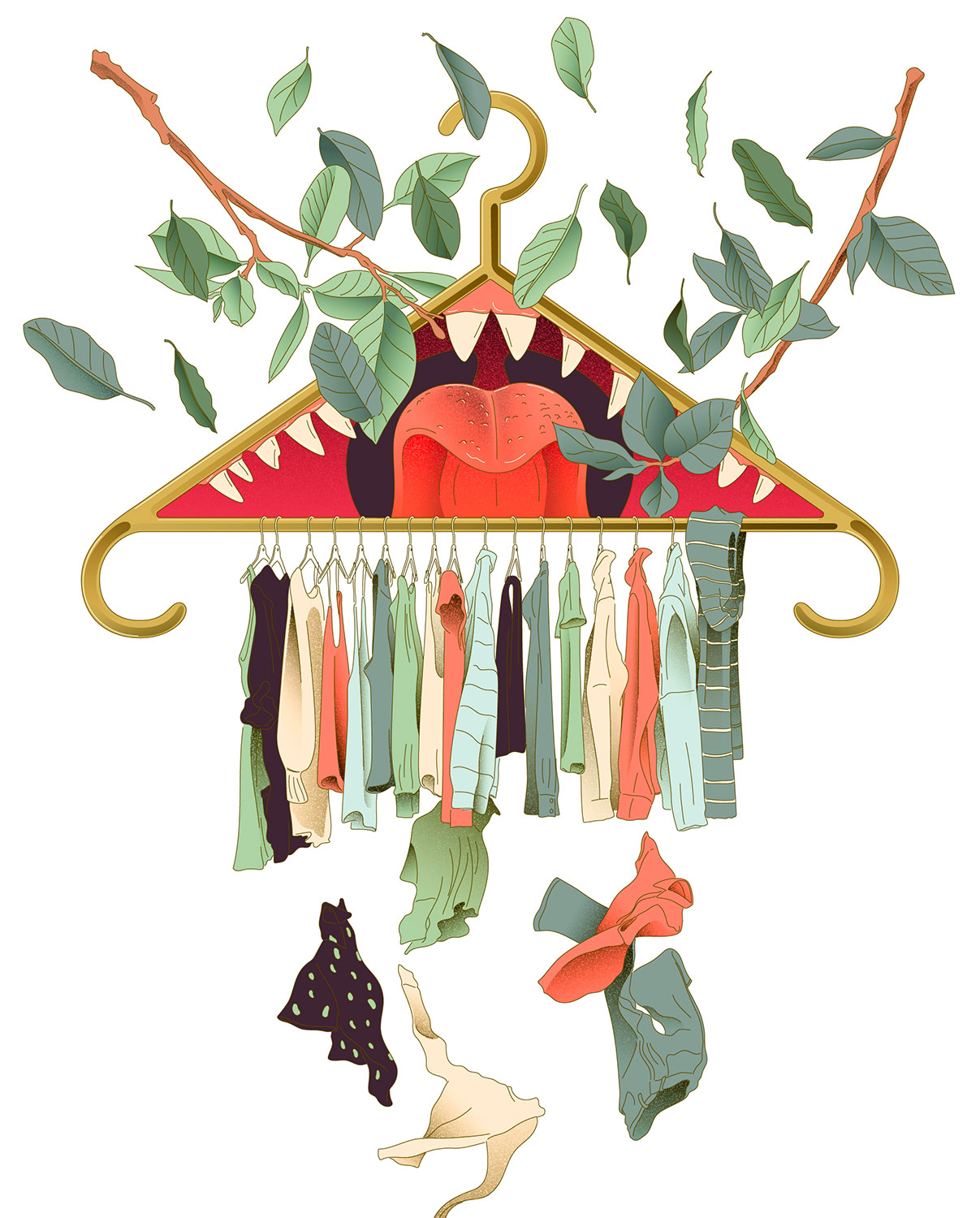 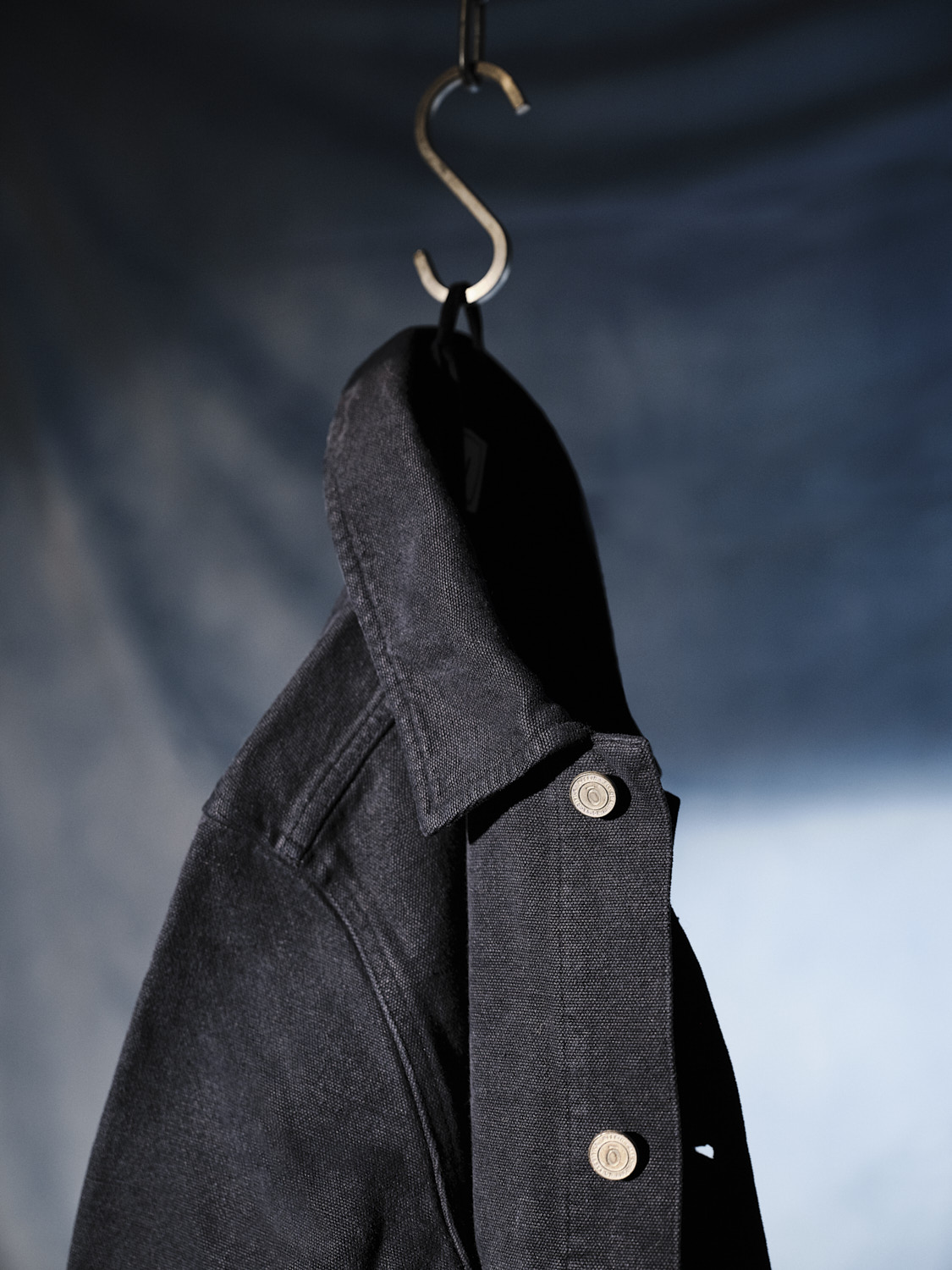 This Heavyweight Worker Jacket is Made of Hemp and Organic Cotton

This Heavyweight Worker Jacket is Made of Hemp and Organic Cotton